Why the Inflation Worries? 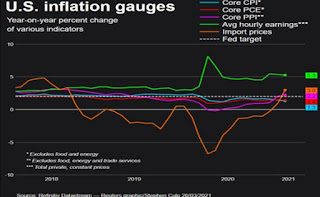 There has been too much talk of inflation, as so-called ‘bond vigilantes’ seek to take advantage of the fear that too much pandemic recovery aid will saturate the financial markets with dollars, creating runaway inflation and boosting interest rates.

That makes sense when so many dollars are in play, right? Not really.

Who are the so-called bond vigilantes that worry about inflation and bond prices? They are usually the most highly leveraged funds that have been buying assets with borrowed money at the record low interest rates that have prevailed since the pandemic and have pushed up some stock prices to stratospheric levels.

A great example is what happened on Monday to a highly leveraged hedge fund investor, reports MarketWatch:

We know that margin calls are because banks require investors to sell the underlying assets that were bought on margin when said asset prices have fallen significantly.

So where is the runaway inflation they speak of? The Fed says they want moderate inflation but have the tools to prevent runaway inflation, and will keep a close-to-zero percent short term rate policy through at least 2002.

There is lots of precedence for the Fed holding real interest rates below inflation rates. It helped to finance World War Two, and GW Bush’s invasions of Iraq and Afghanistan. This is when the real cost of money is close to zero and borrowing needs high during such exigencies.

And we are fighting a world war against COVID-19 that is disrupting economies and killing more people than all the other wars.

Another problem with bond vigilantes’ thesis is the root cause of most inflation—higher demand than existing supply. But the demand for products and services has not exceeded supply for decades—since globalization and lower trade tariffs have made goods in particular cheaper to produce and more plentiful.

There has been little problem with the supply-side of the equation in recent decades, in other words, unless we have major disruptions such as this pandemic that creates temporary bottlenecks in the delivery of said products.

There hasn't been a problem with inflation since the 1980s, either.

“Even before the coronavirus crisis, central banks globally were struggling with sluggish inflation, and the pandemic-induced downturn has only made the challenge worse,” said Reuter’s Ann Saphir.

“Too-low inflation is typically a sign of a weak economy. It also tends to drag on interest rates and makes it difficult for central banks to fight recessions with their usual tools that focus on the cost of money.”

That is why several European countries are struggling with what amounts to negative interest rates, such as Denmark where even mortgage interest rates are less than zero.

The above Reuters graph shows that inflation has barely budged (light blue and red lines), even as average hourly earnings are rising at a 5.3 percent clip. One can call this another goldilocks economy with neither too hot nor too cold growth at the moment.

So those most fearful of soaring inflation and borrowing costs are those that are highly leveraged. And we will see that leveraging disappear soon enough as business activity returns to a new normal the Fed is wanting—holding interest rates at or below inflation; thus stimulating a higher demand for goods and services that stimulates a robust recovery.

Posted by Popular Economics Weekly at 9:48 AM