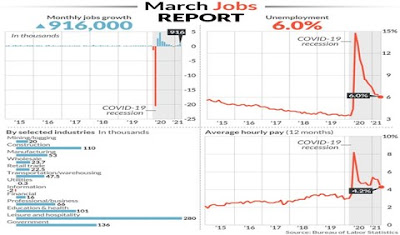 It may be difficult for the naysayers that believe too much aid is going into social programs to find fault with the March unemployment report that added 916,000 new nonfarm payroll jobs. It looks like March economic data augers a recovery that may lead to a decade of robust growth in the overall economy.

Companies are already hiring en masse, in spite of a winter that froze Texas and the record floods and tornadoes that have devastated much of the south.

Almost all business sectors are hiring, including a huge jump in the U.S. ISM’s Manufacturing Index to a 38-year high of 64.7, which means some 65 percent of manufacturing businesses surveyed were expanding.

Much of the hiring has come because happy consumers with an additional $1400 checks in their pockets are dining out and traveling more, but also because the housing market is booming—prompting 110,000 new construction hires in March.

The 916,000 new payroll jobs are just the beginning of this hiring boom that must bring back 10 million jobs to return to pre-pandemic levels. That is why Biden’s $3 trillion infrastructure spending will be needed as well.

So thank goodness for the $5 trillion in recovery aid already raised by congress that is encouraging even restaurants and other leisure servicers to hire 280,000 new workers, Education and Health 101,000, and Government 136,000 workers that is just the beginning of what is needed to make this decade this into a roaring 2020's decade.

The official unemployment rate, meanwhile, slipped to 6 percent from 6.2 percent, the Labor Department said Friday. Yet the official rate doesn’t capture nearly 4 million people who lost their jobs last year and weren’t counted in the numbers because they left the labor force.

It is also why Consumer confidence surged in March to a one-year high as more Americans were vaccinated and states began to open up for business. The index of consumer confidence shot up to 109.7 this month from a revised 90.4 in February, the Conference Board said Tuesday.

Confidence may be rising because some 3 million vaccines now administered per day may have 70 percent of American adults vaccinated by July, say the experts.

But new variants of COVID-19 are beginning to pop up, which has epidemiologists worried because it’s causing a plateauing of the infection rates at an unacceptably high level, according to the CDC.

Infection rates have plateaued because too many variants Of COVID-19 are popping up in some states. Winning the race between the spreading variants and administering enough vaccinations to stop their spread is the key to a robust recovery.

“I think a package that consists of investments in people, investments in infrastructure, will help to create good jobs in the American economy,” testified Treasury Secretary Janet Yellen in congressional hearings last week, “and changes in the tax structure will help to pay for those programs.”

Yellen and Fed Chair Jerome Powell said there was no problem with any inflationary bulges that might occur with so much spending because it was spending that would boost productivity as well as employment, generating even more growth.

Posted by Popular Economics Weekly at 8:51 AM