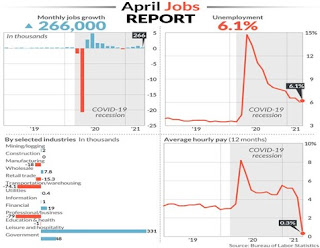 Not everyone is eager to go back to work, according to this morning’s unemployment report. The US economy added just 266,000 new nonfarm payroll jobs in April. Leisure and hospitality led the way with 331,000 jobs and governments added 48,000 new jobs.

“Both the unemployment rate, at 6.1 percent, and the number of unemployed persons, at 9.8 million, were little changed in April,” said the US Bureau of Labor Statistics. “These measures are down considerably from their recent highs in April 2020 but remain well above their levels prior to the coronavirus (COVID-19) pandemic (3.5 percent and 5.7 million, respectively, in February 2020).”

Transportation/warehousing and Professional/business sectors had 153,000 fewer jobs that would be normal for this time of year, since the jobs numbers are adjusted for seasonal factors. There was a pause in hiring in those sectors probably because they couldn’t find enough workers, since there has been no slowdown in business activity in both the manufacturing and service sectors of the economy.

This is in part because the government’s various aid programs are enabling more women to stay at home until their children go back to the slowly opening schools, and many of the 8 million that were laid off are still receiving good unemployment benefits.

The good news is that the size of the labor force grew by 430,000 in April to 161 million, close to the 164.5 million working before the pandemic when the unemployment rate was 3.6 percent.

“The shortfall in new jobs in April is likely just temporary,” said MarketWatch’s Jeffry Bartash in his comments on this morning’s disappointing nonfarm payroll report. “Falling coronavirus cases and massive federal stimulus have turbocharged the economy and job openings have surged. The U.S. is still set up for a summer of strong economic growth, especially if the coronavirus is mostly squelched.”

Employment by local governments also rose 31,000 in April as more schools reopened. Some very essential workers neglected until now—bus drivers, cafeteria workers and other personnel had been unable to work with schools closed, while employment declined in retail, health care, transportation and manufacturing, as I said.

Reuters’ ICAP says “The deceleration in payroll growth this month is not an argument for easier monetary policy.  As Chair Powell keeps reminding everyone, virus-related constraints are the key variable in the outlook.  For much of the past year, the major effect of those constraints was to restrict demand. Given the large number of employers who say they cannot find enough new workers, it is clear that the deceleration in hiring in April was not due to insufficient demand.”

This is only the beginning of what will be a decade-long recovery, with much of it to come from the just-passed American Recovery Act, and upcoming American Jobs Plan, a requested total of more than $4 trillion in additional government spending that will create even more good jobs.

The real question with all this stimulus spending is what will full employment look like in the years to come? Will there continue to be a labor shortage, for instance, with the current declining US birth rate and lower immigration numbers?

It must be one reason the financial markets are boosting tech companies’ stock values (i.e., NASDAQ). They are betting on a big 5G future need for more robots and Artificial Intelligence that will be needed to supplement what could be a looming labor shortage.