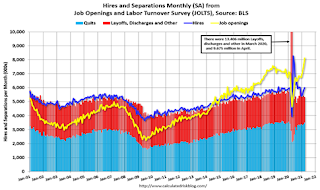 In the arts, entertainment and recreation industry, vacancies increased by 81,000 jobs, said Reuters. Vacancies also increased in manufacturing, trade, transportation, and utilities industries as well as in finance. Job openings rose in the Northeast and Midwest regions. But vacancies dropped in the healthcare and social assistance industry.

There is a red-hot demand for workers after what I call the pandemic recession. So we are essentially at the starting gate of the next growth cycle with first quarter GDP already showing 6.4 percent growth.

So economic indicators will have crazy numbers until we reach herd immunity and everyone—including teachers, day-care workers and government workers—are able to return to work. There are still 2 million fewer women and 1.5 million fewer men in the labor force than pre-pandemic levels.

This Calculated Risk graph shows that companies are holding on to more of their employees with lower separations and quits, while last Friday’s unemployment report actually showed some 1 million new jobs were created, but just 266,000 above the normal seasonal rate of hiring.

The 2 million gap between Hires and Job Openings in the graph means companies are looking for workers. But it will take time for workers to find suitable jobs, and employers perhaps to begin to raise their minimum wages for essential workers in the service sector (that are the lowest paid).

A record number of small businesses said they could not fill open jobs in April, as well, adding to a growing national controversy over whether extra unemployment benefits are keeping scores of people from re-entering the labor force. The extra $300 in jobless benefits was extended to September in Biden’s $1.9 trillion American Recovery Act.

Some 44 percent of small businesses said job openings went unfilled in April, according to the National Federation of Independent Business. The NFIB is the nation’s largest small-business lobbying group.

And we have yet to see the enactment of an American Jobs Plan for massive infrastructure spending that will create even more jobs. Does that mean we have a labor shortage with more then 8 million still out of work who say they are looking for work?

There are supply bottlenecks while companies ramp up production again, and the inflation rate hitting new highs since the Great Recession. Will wages begin to rise as well from their lows of the last 40 years?

The consumer price index soared 0.8 percent to match the biggest monthly increase since 2009, the government said Wednesday. Economists had forecast a smaller rise. The rate of inflation over the past year jumped to 4.2 percent from 2.6 percent in the prior month — the highest level since 2008.

Wages have been held down for most workers by the rising power of corporations and weakening of labor unions since 1980. However, the trend is about to reverse as the demand for workers increases.

Will it cause the Fed to boost their short term interest rates? Fed Chair Powell doesn’t want to, but Treasury Secretary Yellen believes rates will have to rise if higher inflation continues.

Who is right? It is too early to tell. This also means the US economy is in for a wild ride this decade.