There Are More Jobs Than Ever!

American workers are finally in a position to pick and choose from what is a record number of job openings. As proof, the number of quits jumped to a new all-time high of 4.0 million, versus 3.6 million last month.  These are voluntary exits from one job to a presumably better job.

This is panicking 25 red state governors into terminating the additional $300 per week in unemployment benefits early, believe it or not. They seem to be afraid that their workers might take the time to shop for a job with better pay and benefits, which anecdotal evidence already indicates.

The blue line in Calculated Risk’s graph tells us that hiring has actually returned to a more normal level, but sudden opening of the economy has orders pouring in for goods and services, which is more demand that can be satisfied at the moment, and this is boosting workers’ wages.

Reuters said “Higher worker mobility undoubtedly contributed to the surge in hourly earnings in the past two employment reports, as employers must not only pay higher wages to attract new workers but may feel more pressure to raise compensation to retain their existing employees.”

There are still too many unvaccinated employees that don’t feel safe returning to work, and most schools are still out or having only partial re-openings for many women to return to work.

Treasury Secretary Janet Yellen also claimed data does not support the argument that increased unemployment benefits are leading to a workforce shortage. She said when they looked at states and sectors where supplemental benefits were high, there weren't lower job finding rates as the argument would suggest, and in fact it was the "exact opposite." 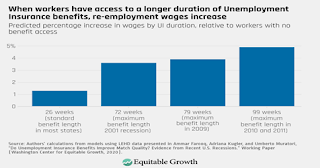 The simple truth is that Republican governors en masse that suppress additional aid for their workers is in keeping with their small government principles. Why else give up $26 billion that will flow to them if they allow their workers to keep the additional benefits?

Sadly, research is showing that this hurts those states, report a number of researchers. A report cited by The Center For Equitable Growth concludes that workers salaries increased as much as five percent when their unemployment benefits were extended to 99 weeks in 2010-11 following the Great Recession.

And as of May’s jobs report released last Friday, the country is still down 7.6 million jobs from before the pandemic, reports The Hill. The May jobs report also indicated that there are 9.3 million people who are officially unemployed — meaning they are actively looking for work and unable to find it. In most industries, the number of jobseekers still exceeds the number of job openings.

We are in a different world with COVID-19 that is killing more than all the world wars, a time  much like the Great Depression and New Deal when a small government ideology makes no sense.

Posted by Popular Economics Weekly at 11:32 AM