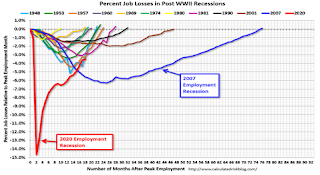 When will they come back to work? That is the question economists are asking with the August unemployment report out today. Although the Calculated Risk graph shows how quickly job creation has recovered in comparison with past recessions (red line) there are still some 5.3 million fewer jobs since February 2020.

Total nonfarm payroll employment rose by 235,000 in August, and the unemployment rate declined by 0.2 percentage point to 5.2 percent, the U.S. Bureau of Labor Statistics reported today. So far this year, monthly job growth has averaged 586,000. In August, notable job gains occurred in professional and business services, transportation and warehousing, private education, manufacturing, and other services. Employment in retail trade declined over the month.

“There was some good news - the decline in the unemployment rate, the decline in permanent job losers, and the decline in long term unemployed - however, there are still 5.3 million fewer jobs than prior to the recession,” said Calculated Risk’s Bill McBride, “and overall this was a disappointing report, probably due to the sharp increase in COVID cases.”

A major reason for the lackluster jobs report is the seasonal adjustment that BLS makes, which means there were just 235,000 more jobs created this time of year than is ‘normal’. In ‘normal’ years there is usually a hiring surge for schools in the fall, but many schools aren’t opening or are slow to open because of the tiff over mask mandates, particularly in the red states.

And the Delta variant of SARS-CoV2 is surging. Mask mandates are a crucial question, because students wearing masks are less likely to have to quarantine under the U.S. Centers for Disease Control and Prevention protocols.

“If a classroom of 25 students is masked and one of them comes down with COVID-19, no one but the sick student has to stay home. If children in the classroom are not masked, anyone in close contact with someone who tests positive must stay home for at least 7 days,” said the Baltimore Sun recently.

It cites several examples: Mississippi has 20,000 students quarantined and South Carolina and Arkansas also had hundreds out of school. Several districts have shut schools down as cases of the virus surged. And by Thursday, five Florida school districts were defying their governor’s order and instituting mask mandates after thousands of their students were quarantined. Hillsborough County alone had sent home about 10,000 students in the first week of school, the Tampa Bay Times reported.

In other words, the unemployment picture is chaotic because red states have chosen to make mask mandates a political issue that will hamper school openings perhaps for months, harming the health of K-12 students unnecessarily. Red-leaning states are doing this really for one reason only—they believe it will rally their troops for the 2022 election.

The BLS reported that in May 2017, 5.5 million teachers and instructors make up 65 percent of employment in elementary, middle, and secondary schools nationwide. There are over 2 million elementary and middle school teachers, representing 24 percent of total school employment. There are nearly 1.1 million secondary school teachers. And add to that 550,000 janitors and school administrators employed.

So it is not good news that the red states are having so much trouble with mask mandates. Do they really believe endangering the health of children is a winning political issue?