What Happened to the Civil War? 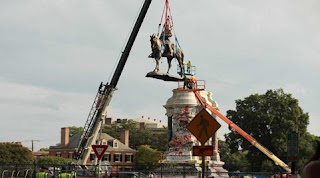 Removal of the largest Robert E Lee statue from its prominent place in central Richmond, Virginia is a sign of the times.

We are no longer fighting what has been called a ‘cold’ civil war. Not the majority of Americans, anyway. The outcome of California Governor Gavin Newsome’s recall election reaffirmed that our defacto civil war between North and South, red states and blue states, is over by a two-to-one margin.

The LA Times Michael Hiltzick commented on it in a recent column.

“The truth is that America is nothing like a polarized country. Large majorities agree on the most pressing issues of the day: They favor abortion rights, stricter gun controls and more COVID-related restrictions, especially on unvaccinated people. You might not be aware of this if you listen to programs on Fox News or even the average political commentary in our leading newspapers or on CNN.”

California has always given Americans a picture of the future, with the sixth largest economy in the world. Silicon Valley is the most obvious example of our technological future, but California also has one of the best-in-country social welfare programs paid for with higher taxes. That is why California’s latest budget surplus was $76 billion, which it is using to cure its worst-in-the country housing shortage, as well as record poverty levels.

“…depictions of an America wracked by irreconcilable disagreement is daily fare. But they’re not reporting a genuine schism in American politics; they’re reporting on a divide pitting a majority in broad agreement against a boisterous minority,” continues Hiltzick.

So why does this “boisterous minority” still grab headlines? I attribute it to what I have called the Bully Mentality, a state of mind attributed to bullies who want to continue to fight a civil war they have already lost. It is bullying behavior adopted by one political party in recent decades to indoctrinate and intimidate voters—particularly minorities and immigrants—by ‘dumbing down’ their electorate to the real world.

The NY Times put it succinctly in a recent front page article by David Leonhardt that examined the vaccination divide between red and blue states.

“What distinguishes the U.S. (from much of the rest of the world) is a conservative party—the Republican Party—that has grown hostile to science and empirical evident in recent decades.”

Hiltzick attributes this hostility towards facts to President Nixon and Republicans’ switching to culture wars when they began to lose voters. For instance, its anti-abortion stance was an attempt to lure Catholic voters away from Democrats. I remember it happening when many Republicans signed onto Ralph Reeds (Protestant) Christian Coalition, with its denial of evolution and replacement with creationism theories and a literal reading of the Bible.

So why do conservatives continue to even attempt to keep this un-civil war alive?

I recently mentioned Kennedy economist John Kenneth Galbraith’s answer, in speaking of France’s Ancien Régime that preceded the French Revolution: “The privileged feel that their privileges, however egregious, they may seem to others, are a solemn, basic, God-given right.”

And we know how that revolution turned out.