Why call A Recession Now??

We are at a classic top of the business cycle when the demand for products is sky high and all the factors that restrict supply are causing red hot inflation numbers. The Federal Reserve then must per its mandate to balance employment with price stability step in to restrict credit by raising short-term interest rates, among other measures.

What happens next will determine how high the Fed pushes interest rates to ‘tame’ the inflation tiger, and whether it causes another recession.

What the pundits who predict such things seem not to keep in mind is there are many parts that make a recession, which take a lot of time to happen (see wide spacing between gray bars that indicate recessions in NBER employment graph.).

The National Bureau of Economic (NBER) is the actual arbiter of recessions, and it says: “The determination of the months of peaks and troughs is based on a range of monthly measures of aggregate real economic activity published by the federal statistical agencies.”

And most of the indicators, including employment, consumer spending and industrial production, don’t indicate much of an impending slowdown. 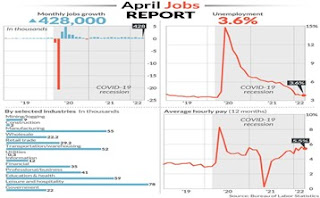 The unemployment rate remained unchanged at 3.6 percent and 428,000 more jobs were created in April, according to the US Labor Dept., so no real sign of weakening employment, one of the first signs of a recession. Industrial production and business investments are also high and show little signs of slowing. Consumer spending is red hot and may suffer most from rising interest rates.

But the real test will be if many of the supply chain shortages can be circumvented, from chip makers who failed to predict the soaring demand for motor vehicles, to a war in Ukraine causing food shortages. And we still have the tail end of the coronavirus pandemic affecting China, a supplier of much of the world’s cheap products.

Under Chairman Greenspan, the Fed raised its rates 16 times over two years, after holding rates below the inflation rate for too long in early 2000, causing in part the housing bubble while allowing the negative interest ‘liar’ mortgages that brought down Lehman Brothers and caused the Great Recession.

And the number of job openings is at a series high of 11.5 million on the last business day of March, although little changed over the month, the U.S. Bureau of Labor Statistics reported on Tuesday. Hires, at 6.7 million, were also little changed while total separations edged up to 6.3 million.

So recessions take a long time to happen, in general, and there are much more important priorities now, including aiding Ukraine in its war with Russia and continuing to fight the pandemic.