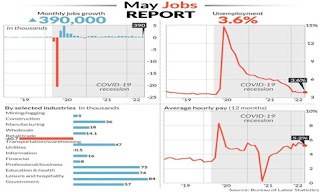 “U.S. stocks fell Friday after better-than-expected May payrolls data reinforced expectations for a series of interest rate rises by the Federal Reserve in coming months,” was MarketWatch’s headline re May’s unemployment report.

The employment report showed 390,000 payroll jobs and the unemployment rate holding at 3.6 percent, with almost all sectors adding jobs. Restaurants and hotels added 84,000 jobs in the unemployment report, as summer vacation time approaches. More people are going out to eat, traveling or taking a vacation. Employment also rose by 75,000 at professional businesses, 47,000 in transportation and warehousing and 36,000 in construction.

It was a very good report and a total of 8.1 million jobs have been added to payrolls since January 2020.

So, why did stocks fall with the good news? Friday’s selloff was caused by the fear that the Fed would now raise rates sooner and higher, so markets could no longer rely on almost free borrowed money to trade that had prevailed during the pandemic with the record low interest rates.

Or, markets had not been listening to the Fed’s change in monetary policy. Former Fed Chair Bernanke’s most recent remarks in Barron’s Magazine highlighted just how much the Fed has changed its monetary policies. It now considers its other mandate, full employment, as important as stable prices. It considers inflationary spikes a lesser danger, especially when caused by the current supply-side shocks from factors it has no control over—the pandemic, a Ukrainian war, and China’s COVID problems.

Ever since Paul Volcker’s Fed and the stagflation of the 1970s, the Fed had reacted too quickly to any hint of inflation in raising their interest rates, “even in the absence of inflation,” said Bernanke. The result was wages and economic growth barely growing above inflation, averaging just 2 percent since then with higher unemployment rates.

The Fed has “foresworn such preemptive strikes” when it initiated its new monetary framework, which it called flexible average inflation targeting, or FAIT, in August 2020, said Bernanke.

So the actual slowdown in job growth could be a good sign, since it might mean less inflationary pressures and thus the need for the Fed to raise interest rates too high too soon.

There was another sign of slowing growth in the service-sector ISM survey as well. One headline reported, “Service-sector expands at slowest pace since early 2021.”

But the ISM index showed that activity dropped only slightly from 56.7 to 55.9, where any number above 55 means very strong expansion. The decline was led by a decline in business activity and slowing supplier deliveries.

The non-partisan Congressional Budget Office (CBO) that ‘scores’ existing legislation for its effect on economic activity concurs with the Fed’s optimistic scenario. It said U.S. economic growth will exceed 3 percent in 2022, while “roaring inflation has topped and will cool each month to around 2 percent by some point in 2024,” according to a government forecast published last week.

All-in-all, we must look beneath the headlines to understand what is really happening this year with the mix of conflicting bad and good news. Unfortunately, the financial markets aren’t helping matters with their fear of what the Fed might do next.