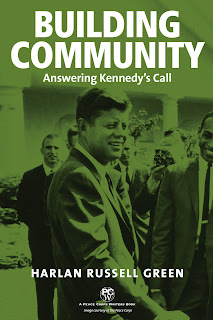 I wanted to remember 9/11 when I wrote my memoir on the Kennedy era that has just been released. It was also a time of busted communities, and a Vietnam War that split Americans. It was an Imperial America that wanted to make the world in its image, rather than create peaceful change that tolerated other peoples and cultures such as I worked for during the following years, after President Kennedy’s death.

I began writing this memoir about my work in public service in 2017, after wondering how it was possible that Americans had elected a president suffering a severe mental disorder. Did it mean our democracy was dying or already dead, and Americans now wanted a demagogue as president who believed that he was above all laws and the constitution?

It reminded me in many ways of the 1960s when there was just as much social unrest and different ideas of democracy. This was the era of McCarthyism and communist witch-hunting, right wing against left wing political views, the civil rights movement, and an unpopular war in Vietnam that was fracturing American communities.

We coped with the dysfunction and cynicism then by searching for communities that could mirror our values and ideals, and when we found them, to contribute to their growth.

I am writing about my years working to develop successful communities to show that it is possible to do it today in the face of so much social unrest that has created deep divisions and the possibility of future wars.

I believe that spirit of service is alive in younger generations that also want to make their country a better place. Many of them in the Millennial and Generation Z population groups are also searching for like-minded communities that serve a greater cause, that will bring people together in common purpose rather than separate them.

The Peace Corps was such a cause I believed in. I became a Peace Corps Volunteer to work in a program that improved the lives of Turkish farmworkers. A few years later I joined the Environmental Protection Agency at its inception because it was an organization dedicated to protecting the environment with the newly enacted Clean Water and Air Acts.

My membership in the United Farmworkers Union under César Chávez later in the mid-1970s was more happenstance. A cousin of mine in the construction trades roped me into helping him rebuild the UFW’s new headquarters, and it was extremely difficult to withstand the charisma of its founder and president, César Chávez. I was soon swept up in his vision of a union formed to improve the working conditions of Mexican farmworkers.

These were organizations dedicated to improving lives that taught me the fundamentals of healthy communities, fundamentals that enabled me to continue to improve the lives in my own community and led to the formation of a new California city.

There were many others doing what I did in that era. My history is one small part of the change that has been happening in American communities, towns, and cities whose members seek to improve their lives.

Former President Obama challenged Americans to inspire the youth to a life of service in 2017 after he left the presidency; and the youth he talked about are my target audience.  He said then:

We have some of the lowest voting rates of any democracy and low participation rates that translate into a further gap between who’s governing us and what we believe. The only folks who are going to be able to solve that problem are going to be young people, the next generation. And I have been encouraged everywhere I go in the United States, but also everywhere around the world to see how sharp and astute and tolerant and thoughtful and entrepreneurial our young people are. A lot more sophisticated than I was at their age. And so the question then becomes what are the ways in which we can create pathways for them to take leadership, for them to get involved?1

President Obama’s words came from his experience as a community organizer in Chicago. And studies show that Millennials and Generation Z youth now reaching adulthood want to make the world they have inherited a better place to live. Millennials’ preferences will be influential for no other reason than they are the largest generation ever, born from 1980 to 1996, outnumbering even their Baby Boomer parents.  They are also a much more diverse and tolerant population, which is why they are picking up where we left off in their preference for making worthwhile life choices.

It cites a 2013 survey of over 1,200 U.S. adults that found Millennials to be the generation most focused on corporate social responsibility when making purchasing decisions.  Almost all Millennials responded with increased trust (91 percent) and loyalty (89 percent), as well as a stronger likelihood to buy from those companies that supported solutions to specific social issues (89 percent). A majority of Millennials reported buying a product that had a social benefit, and 84 percent of a generation that accounts for more than $1 trillion in U.S. consumer spending considered a company’s involvement in social causes in deciding what to buy or where to shop. In 2013, 89 percent of all American consumers said they would consider switching brands to one associated with a good cause if price and quality were equal.

One 30-year-old Millennial said in 2013, the 50th anniversary of President Kennedy’s death: “Though his [Kennedy’s] goals were typically big, what he sought from individuals was often rather small. Not everyone was expected to join the Peace Corps or become an astronaut or participate in the Freedom Rides. But citizens were asked to do their part—to think about how they could improve their community or make another person’s life easier—to look past their differences and focus on our common humanity. We badly need this message again. I believe it is one that resonates deeply with young Americans who are yearning for a time when we can search for new frontiers and once again be part of the same team.3