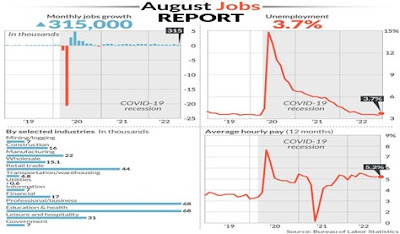 Why does the Federal Reserve believe this is inflationary, when there are many other factors causing the current price rises, including record corporate profits?

Total nonfarm payroll employment increased by 315,000 in August, said the BLS. Nonfarm employment has risen by 5.8 million over the past 12 months, as the labor market continued to recover from the job losses of the pandemic-induced recession. This growth brings total nonfarm employment 240,000 higher than its pre-pandemic level in February 2020.

Once again, many pundits and some economists will say this unemployment rate that rise from last month’s 3.5 percent to 3.7 percent is still too inflationary and must rise further to tame this inflation surge and cool off economic growth, when it is risingcorporate profits causing most of the inflation.

Hiring more workers means creating more products, which should increase supplies thus driving down prices. But if corporations can increase their prices at an even faster rate, then inflation rises.

Their record profits, reaching  levels of the 1950s as a percentage of GDP, are a reflection of their ability to continue to raise prices, whereas wages and salaries increasing at 5.2 percent have fallen behind the inflation curve, lessening their buying power.

Economists are beginning to recognize that record profits may be more responsible for what I will call the current ‘profit-price’ spiral, rather than the ‘wage-price’ spiral of the 1970s that the Fed Governors seem to be focused on.

Quoting Reuters economist Jamie McGeever:“But looked at through the prism of profits, corporate America is also in rude health, especially big business. In the second quarter this year U.S. companies raked in profits that, depending on the cut, were the highest on record, or close to levels not seen in over half a century.”

“This is an inflationary threat too, but we hear far less from policymakers about it than the risk of wages fueling a price spiral that would only be crushed by interest rate increases like those administered by former Fed Chair Paul Volcker in the early 1980s.”

It may seem evident that consumer’s ability to pay the higher prices is part of the inflation problem, but consumers have little choice with the supply shortages of even basic necessities, and profits rising at an even faster clip.

U.S. corporate profits as a share of GDP in the second quarter rose to 12.25 percent, says McGeever, around their highest levels since 1950. Profit margins for non-financial firms rose to 15.5 percent in the same period, closing in on last year's peak going all the way back to the 1960s.

Don’t we want businesses to keep hiring more workers to produce more goods and services? The Fed doesn’t, apparently, since it’s still focused on a completely different era when wages were rising as fast as profits. It is apparent that that is no longer the case.

Posted by Popular Economics Weekly at 7:54 AM