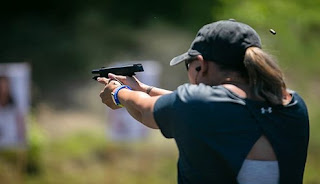 The NY Times front-page picture of a teacher “armed and ready” to wear a gun in her classroom shocked and disheartened me. I remember the fear I felt as a small child hunkering under classroom desks in civil defense drills during the cold war.

And the irony of teachers wanting to arm themselves to protect their schools shouldn’t be lost with the current celebration of the killing of Al Qaeda’s number two—Ayman al Zuwahiri. This is looking in the rear-view mirror of foreign terrorism now vanquished, when domestic terrorism holds the greatest threat to our national security.

How does that teacher think her children will feel seeing her arming herself, and other staff whose job it is to care for them?

“Today, after a seemingly endless series of mass shootings,’ said the NYTimes, “the strategy has become a leading solution promoted by Republicans and gun rights advocates, who say that allowing teachers, principals and superintendents to be ar.med gives schools a fighting chance in case of attack.”

Really? I fear children will learn that violence is the only answer to combat terrorists in schools, in a country that allows weapons of mass destruction to be owned by 18-year-olds as happened in Uvalde, Texas.

More guns have never been the solution to reducing gun violence, as Australia’s history has shown. Australian demographics are similar in many ways to America’s—similar age distribution, wealth distribution, etc.—yet Australia has only had three mass shootings since it banned military-style assault rifles.

That happened because of a 1996 massacre in Port Arthur, Tasmania. During that event, a gunman killed 35 people and wounded 28 others with a semi-automatic weapon he bought from an ad in the newspaper. Twenty of those people were killed in just a minute and 15 seconds.

Will we ever subdue gun violence in America, which means enforcing the real intent of the Second Amendment by disarming our unregulated militias?

A country such as ours that cannot protect its children from domestic violence is a country that does not care for the welfare of its future generations that once again will have its children cowering under desks because of the threat of legally acquired assault rifles, which are literally weapons of mass destruction.

Posted by Popular Economics Weekly at 10:06 AM